During the course of our 100 years of growing the finest ornamental nursery stock available in our green industry, we have proudly originated and introduced many new evergreen cultivars to the trade. We provided all of these plants to the trade openly, with no patent or royalty fees attached, nor restrictions placed upon others who wished to grow these new varieties. We hoped these new plants would add beauty and diversity to the palette of landscape selections available to property holders wishing to enhance the aesthetic value of their homes and businesses. We believe our plant introductions have accomplished this goal for decades, and continue to do so today.

We are often asked to tell the stories of how some of these Fairview Evergreen introductions came to be. What better time than our 100th anniversary, then, to share some of the history behind just a few these popular and time-tested Fairview Originals! Much of the history here comes courtesy of D. Garth Hetz, our recently retired third-generation president, and Neil Hetz. We are fortunate that Neil, the youngest of our five second-generation owner-operators, made detailed notes about these introductions as we were developing and trialing many of the older ones. Neil passed away in 2007, but we will be forever grateful to him for his contributions to the nursery, not the least of which was serving as an unofficial company historian.

Our founder Frank C. Hetz made the original selection of Juniper chinensis Hetz's Columnaris from a bed of Juniper chinensis seedlings in the 1930s. In those days FEN grew a lot of seedlings from collected seed. This one showed early promise because of its vigorous upright habit and nice medium-green color. It also displayed two types of foliage - scale and needle type, and produced small blue berries later in the season which added to its appeal. The Hetz Columnaris first appeared in our retail catalog in 1942. Since then it has become very popular in the trade. Some of our Canadian nursery friends started calling it the Fairview Juniper years ago, and that name for it is probably as common now as Hetz's Columnaris.

Thuja occidentalis Hetz's Winter Green was first offered for sale in our Fall 1950 wholesale catalog, with the following description: "This is new - first offering. This was a winter selection chosen primarily because of its deep green color and glossy foliage, apparently having some Elegantissima parentage. It is a rapid grower and a good pyramidal tree." We believe that the plant was selected from some Pyramidalis seedlings which had cross-pollinated with some Elegantissima (gold-tipped arborvitae) that we also grew. The Elegantissima parentage can be seen in the lustrous, almost shiny dark green new growth. Its narrow upright habit shows its Pyramidalis parentage. The Hetz Winter Green is a vigorous grower and will get quite tall. It has a strong central leader and is less likely to be damaged by heavy snows than some of the other dark green arborvitaes.

Thuja occidentalis Fairview is a selection made by A. Leroy Hetz in the 1970's. Fairview Arborvitae, as it is know in the trade, also came from Pyramidalis seed. It is similar in habit to Thuja occ. Nigra (Dark Green American Arborvitae), but displays a more compact, formal look. We have listed them for sale for the past 20 years or so, although they have yet to become as big a seller as our other arborvitaes. We believe this would change quickly if customers took the chance to sample them. The Fairview is truly an outstanding selection, with uniformly symmetrical growth, excellent snow load resistance, and rich foliage color.

We first find Thuja occidentalis Hetz's Midget listed in our 1942 retail catalog with this description: "This is a new, very dwarf globe, tight, compact and with a good green color. After ten years it will not exceed 12 inches in spread." It must have been one of the first selections that Frank Hetz made for him to have established that in ten years it wouldn't exceed 12 inches in spread! We think he probably selected it as a seedling from Thuja occidentalis (American Arborvitae). Over the years we found they don't grow as well in the field as they do in containers, where we can control the soil mix and watering. We sell them only in pots today. We have seen the Hetz Midget Arborvitae listed in catalogs all over this country as well as Canada and Europe.

Leroy Hetz discovered the original Taxus media Fairview yew in a block of Taxus cuspidata spreaders sometime around 1950. How it got there no one is certain, but he liked the plant and began to take cuttings from it to propagate. We then lined them out and grew them as specimens. When these also proved superior we started propagating heavily. Left untrimmed the Fairview will grow into a vase-shaped spreader, but we found early on that it can be trimmed into a beautiful low globe or mound, which is the shape our customers prefer. It's a male - no berries, but lots of pollen buds in the spring. It is quite winter hardy, and will tolerate the hot sun and drying winds of places like our Kansas City market. We first listed Fairview Yews for sale in the mid 1960's, and over the years they became one of our best sellers.

Leroy Hetz also discovered Taxus media Sun-burst, probably around 1960, in a block of Japanese Upright Yews. Yes, the original Sun-burst Yew was an upright! Leroy took the plant home to his yard where he could watch it and take cuttings from it. In 1964 we decided to grow it commercially, and gave it the Sun-burst name. In the beginning we took both terminal and side-branch cuttings, so we had both upright and spreading Sun-burst yews. Eventually we decided to drop the upright form and grow only the spreaders. The plant gets red berries, but not a lot unless it's under stress. It has a beautiful golden yellow color on the new growth, and needs to grow in full sun to show its best color. It takes on a rusty appearance in winter. It is a relatively slow grower, and 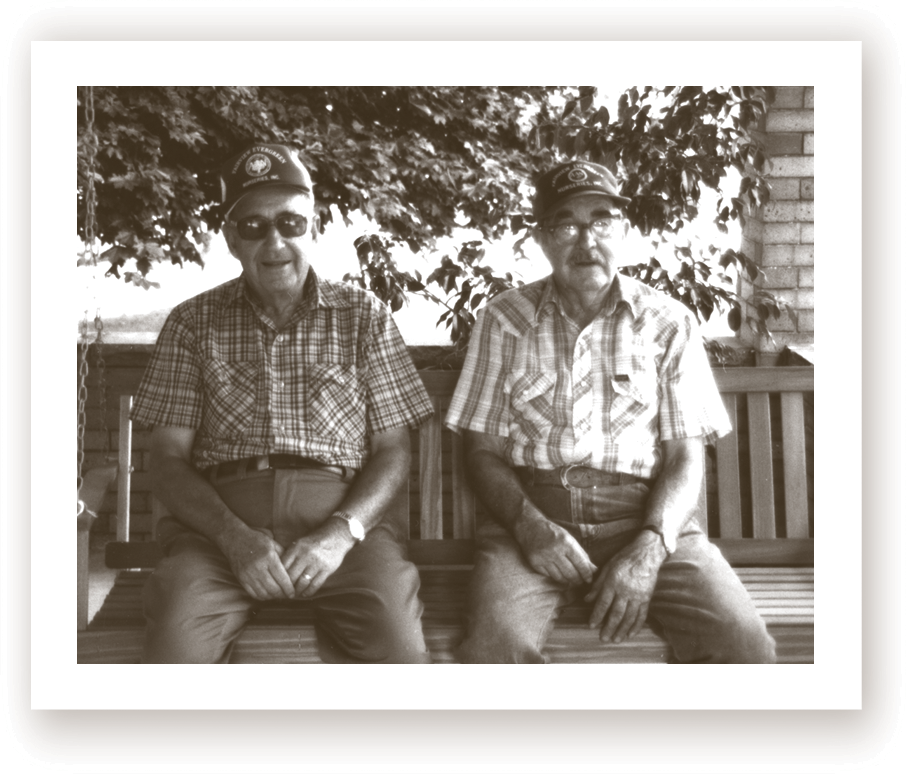 can easily be kept under control by shearing once a year. It will provide that splash of color in the landscape that everyone is seeking today. During the 1930's Fairview Evergreen grew both upright and spreading types of Taxus cuspidata (Japanese Yew) using seed imported from Japan. With the advent of the World War II era, we could no longer get Japanese seed, so we started to pick our own seed at the nursery, and from the yew hedges around our homes. The seedlings that were produced from this collection of seeds were, as the saying goes, "like cats and dogs." The seed was cross-pollinated by whatever variety of yews happened to be in the vicinity. There were long-needled and short-needled seedlings, spreading types, columnars, pyramids...every sort one could imagine. We planted them all in one block to see what they would do. Out of all of them we selected two beautiful columnar types which we decided to propagate.